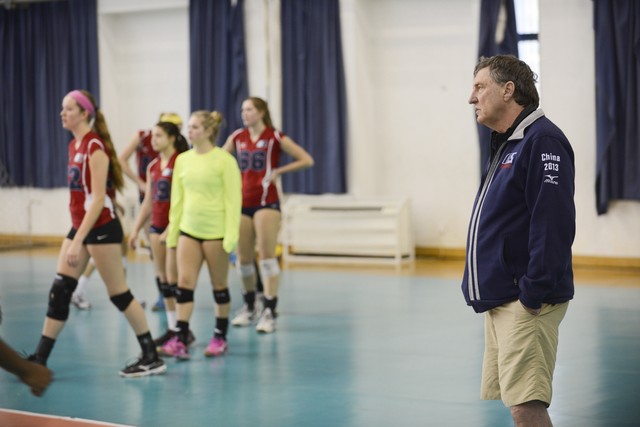 The volleyball experience was everything we wanted it to be except, perhaps, that it was too short. We played 7 matches and practiced three times over the course of 10 days. This was an aggressive, challenging physical schedule for our athletes particularly when one figures in the arduous travel, exotic new food and strange and wondrous locales.

All of our matches went 5 except for one. The age range of the Chinese players was the same as the A5 team composition thus giving us an interesting means of comparison. The spoken languages each team utilized were quite different but the language of playing the game on the court was common ground and very exciting to witness.

We saw many fine liberos and, generally, the defense played by the Chinese teams was very high level. Pursuit for them was intensely consistent. The libero from the last day’s competition at the Shanghai Provincial Training Center was an incredibly dominant player, embodying model libero play. She passed everything. Defended as if her life depended on it.

In Nanjing at the Jiangsu Training Center we also were privileged to watch the Chinese libero who plays for China’s national team train. We then got to see her compete for Jiangsu during the professional league match we attended where Jiangsu played Shanghai, Shanghai winning in 5. She is an absolutely amazing player.

The professional match was truly engaging for our athletes. The match itself was exciting and reasonably well played. Then through Chis Chen, our in country group facilitator, the A5 players were allowed down on the court after the match was concluded where they took pictures with the Jiangsu team as well as speaking with one of the setters who was a former UCLA player.

We witnessed three different styles of play while there. Consistently strong serving. Resilient competitive spirit. Strong practice ethic. They struggled at times with our pace of play. When we were rhythmic and in system we were very challenging for them to handle.

The technical differences between the Chinese and American players were not as great as one might have imagine. Very similar setting style. Arm swing as well. Serving was a little different and very strong. General ball control skills and minimum level of play was high amongst almost all players. Much repetition. Great pace and tempo in their practices. Many, many good coaches who were warmly receptive and supportive of us being in the gym with their athletes.

Speaking of coaches it was a great honor to travel to China and work with Jing Hou and Scott Cioffari. They both gave unceasingly of themselves and were totally engaged by the work. It was so very cool to be with Jing in his home country where he knew almost every player and coach we encountered, all or most of them associated with the Chinese National team. He is a humble, confident man and a great, great coach.

One of the transcendent things to see and experience was the interaction and work of the A5 athletes themselves. While all of them knew each other prior to the trip there were 5 different teams from A5 represented. The schedule we kept both on and off the court was grueling. The girls never faltered. Not once. When we were in the gym they were very engaged by the work. When we were out exploring the cities and country side they were a joy to be around. They were responsible, on time and joyous to say the least. They got along with each other under consistently challenging conditions. They leapt fearlessly into the new. To see them climb the Great Wall of China was emotional and inspiring to say the least. The way they supported each other as sisters of the game was something to behold. By the time we left they had forged one beating heart on an incredible journey of discovery and growth.

It is almost impossible to accurately describe all that we were able to do both on and off the court. Everything was an adventure. We were all so alive in the moment. Tianamen Square, the night time river boat cruise in Shanghai (shades of James Bond), the Forbidden City, the Temple of Heaven, Ming’s Tomb, Shanghai’s skyline, 101 School, Jiangsu and Shanghai Training Centers, the ancient Chinese town and market, the Taoist temple, the Pearl Market and the Pearl Tower, the professional league match, the bus rides, the traffic, the food, the people, all were vibrant and impactful experiences creating memories that bond us forever as a group of people.

One final note is to recognize the work of Denise Templeton, our fearless and tireless group leader. She has left a debt we can never repay, I can never repay. Without a person like her to attempt a journey like this would be a perilous and dicey thing.

Special thanks as well to Sandy Vong. Without his vision, experience, leadership and support none of this would have been possible.

Thanks also to the families of the athletes who were willing to trust us with the most important thing in their lives, their children.

Will we go back? Absolutely. Was it everything we hoped it would be? Yes, it was. Indeed it exceeded our expectations both on and off the court. We are so blessed.