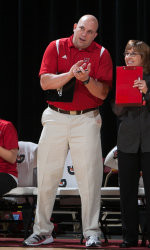 January 15, 2013 - THE FLATS - Former A5 coach Chuck Crawford, who spent the last two seasons at Miami (Ohio), has been named assistant volleyball coach announced by head coach Tonya Johnson Monday. He will serve as the recruiting coordinator, director of camps and assist with training and player development.

All of our teams are encouraged to give back to the community by undertaking a community service project that may or may not have anything to do with volleyball.