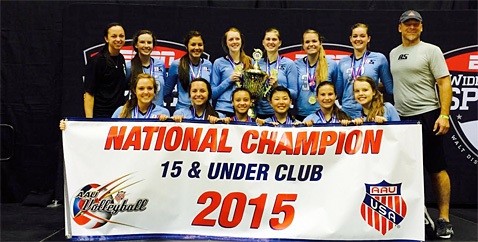 The 2015 competitive season is now behind us.  22 of our top girls teams earned the right to extend their seasons beyond AAU's, and the Club fared well against the best in the country.  We also sent three boys teams to USAV Nationals in Columbus.

Though a legitimate National Championship still eludes us, three of our teams were knocking on the door and I have a Fletcher Forecast:  that the core group comprising the first USAV National Champions in A5 history is already playing for our club.

(Truth in advertising -- A5 has won four National Championship tournaments -- incredible accomplishments that will be forever remembered by the girls on those teams -- but until we win one in the Open division at USAV Nationals, we will refrain from claiming to be National Champions.  the four teams:

This policy is in stark contrast with several clubs in the Atlanta area who broadcast "National Champions" all over their website despite never having even qualified a team to compete in the Open division.)

But I digress.  Following are some of the highlights that came out of NOLA:

Three teams medaled in the Open Division -- A5 12 Jing, A5 15 Gabe and A5 14 Suzanne -- breaking last season's record of two in which 17Jing won a silver medal and 18 Bob finished 3rd.  (More truth in advertising -- there is no Open division in the U12 age bracket.  Since "National" is the highest division offered for these young players, we're using the word "Open" to describe their finish, since they competed in the highest division offered.)