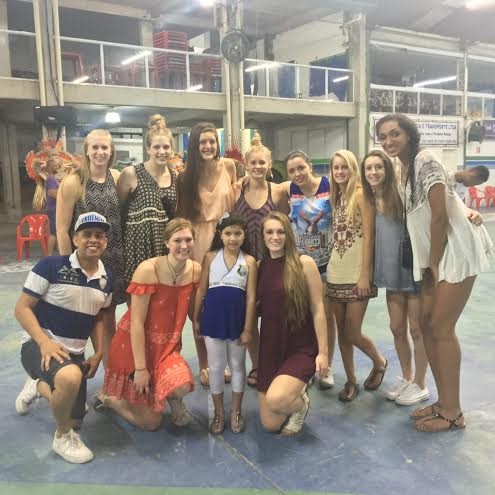 November 23, 2015 - To finish up day 3 we headed to dinner at Octavio in São Paulo just around the corner from our hotel. We were presented with traditional Brazilian dish called "tapioca" which is a type of tortilla filled with eggs, ham, cheese, and tomatoes in it. Some picky people chose to avoid the dish and order Caesar salads instead, which were fantastic. Because our translator for the trip, Patty, looked fabulous  in her Samba get-up everyone took turns getting pictures with "The Queen" and each other before heading to the Samba show. We rushed to the bus to depart for Unidos de Vila Maria in a warehouse near an alley. The sketchy area shocked us at first, but the people were so welcoming and excited to see some newcomers at their party. Fascinated with our team, a teenage boy began to wave at the bus. Trying to be friendly, Gabby Gonzales responding by waving back, causing his girlfriend to get jealous and slap him. As we walked in we were greeted by many Brazilians of all ages and were immediately thrown into the dancing circle. There were groups of all types of people performing the same dance that has clearly been choreographed before. As we danced around the circle the band played, banging drums, singing, and chanting for us to continue dancing. We found out later that their number one rule was to never stop dancing, as Patty yelled as us if she saw anyone slowing down. We came to find out that just ten minutes of this dancing caused the team to start dripping sweat and we all agree that Samba dancing is far harder cardio than Karen's workouts! The feedback caused Bob and Gabe to rethink the cardio we do in practice and have agreed every two weeks we will have Samba dance offs as part of our workout. As we danced the night away people began to fade away, but we partied hard. The hardest thing for us to do was to get over the fact we all looked completely ridiculous, but to embrace the culture instead. Patty gathered us in a circle and began to show us her Brazilian moves while shaking her butt and moving her feet swiftly. Trying to mimic her, Jing was able to get many (embarrassing) videos of the difference between Patty's dancing and our attempts. While in the circle we were instructed by locals to dance in many different ways. When the band finally finished we were able to take a seat and reminisce on the amazing experience we just had. While we were sitting down the cutest little six year old girl came and kissed all of us on the cheek, thanking us for the fun night. Lexi was the first she kissed, taken aback by the Brazilian tradition of kissing on the cheek. She just about leaned in for the lip lock. The pictures started with locals soon after and everyone was very interested in our tall team. As we were waiting for the bus Deja noticed mannequins dressed in fancy Samba attire- including headdresses and full body apparel. Patty encouraged us to try them on, so we did and loved it! We had lots of fun taking pictures with the colorful pieces. We partied home on the bus, thrilled and amazed at the experience we just had. After a quick meeting, we were sent to our rooms to chill, watch movies, order room service of course, and bond together as a team. After a fun night we were blessed with a later breakfast at 9:30 am. We went back to the room to get ready for a fun day of tourist attractions, shopping, and volleyball! We departed from the hotel at 10:30, heading for the famous cathedral in São Paulo. We were warned from the very beginning of the trip the dangers of pick pocketing outside the cathedral. However, we were able to take plenty of pictures outside and inside the beautiful Cathedral, learning a lot about Brazilian history. Again, people were fascinated with our BEAUTY and height, taking pictures of and with us, all throughout the Cathedral. After the Cathedral we loaded the bus once again and headed to a large local indoor mall to eat lunch and shop. We ate fresh pasta and pizza, and snacked on McDonalds and Starbucks. We were allowed to split up in groups of 4 to go shop. Some girls bought clothing, bathing suits, and more, while others bought chocolates and other gifts for friends and relatives. At 2:45 we were told to meet at an Outback Steakhouse in the mall, to leave for the hotel. Everyone arrived and shared what they bought with each other. Soon after, we left for the hotel. We arrived at the hotel with 45 minutes to mentally prepare for the match, as well as get dressed for our upcoming match