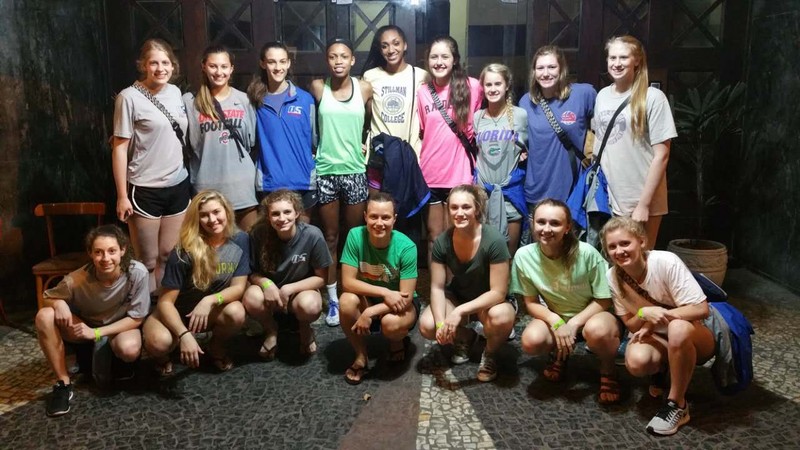 November 25, 2015 - So we took off to play one of the best teams so far.  The bus ride was not too long but was fun as always.  The bus drivers here love to drive really fast!  There is so much traffic and the cars come so close to each other. We saw so much graffiti on every building and little motor bikes fly in between cars!

Ibirapuera is the name of the club team we played. They looked so much older than us and could jump so high we all kind of stopped and stared when we first saw them. We played hard, but, sadly lost the match. The scores were 25-27, 25-21, 20-25, 20-25.
The gym we played in was amazing!  It was a huge dome and had seats going up to the ceiling, and a round playing area with a court in the middle, so we had a huge area to run and go get balls.  We all were sweating so much because of the humidity, so we went out back and filled up our water bottles at the one water fountain in the street. After the match, we went to a great place for dinner! The restaurant we went to had an all you can eat buffet and then the servers came around with different meats on sticks and asked us what we wanted and they used machetes to cut you off a piece.  It was Libby Bochniack's birthday, so out waitress brought us out a whole cake and the restaurant sang to her and it was so delicious!  And then of course Sarah smashed cake all over Libby's face and everyone took pictures!
After dinner we all went back to the hotel. Sadly we had to say goodbye to the Samba Queen, Patty (she was also our interpreter). We grew very attached to her. She helped us so much and was so sweet.  Patty went around and hugged everyone and we all took pictures.
Brooke told us the plan for the next day, which included traveling to Rio de Janeiro!!! We all loaded the bus ‪at 9 am‬ and drove for about 5 and a half hours before we finally arrived in Rio. We slept for a lot of the ride, but we were able to see some very interesting things along the way. At one point, we found ourselves on a narrow road winding down a steep mountain. It felt like an amusement park ride because the bus was going around the corners pretty fast!  Just outside of Rio, we saw horses wandering in the streets.
When we arrived in Rio, we saw a lot of the construction for the Olympics. We checked into the hotel. The first thing we saw when he walked in was two flights of stairs which didn't exactly agree with our huge suitcases. Along with most of the buildings in Rio, it was very cute but also very antique. After we checked in, we walked down the street and had somewhat of a late lunch. The lunch was a traditional buffet with lots of Brazilian food, but lots of us were excited to see mashed potatoes! After lunch we waited for our bus to take us to the professional match to watch Courtney Thompson, setter for the USA national and Olympic team. She plays professionally for the #1 team in Brazil - RexonaAdeS