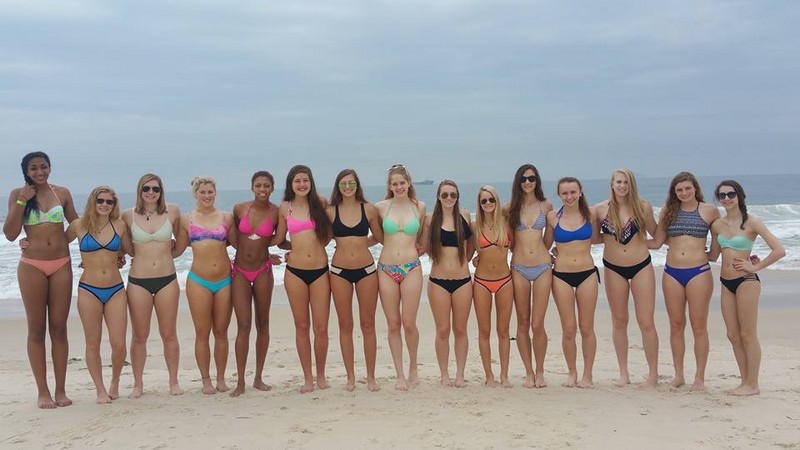 Last night we attended a professional volleyball match. One of the players we were able to watch was Courtney Thompson, the US national team setter. Thompson was in the 2012 London olympics. The same team also included the best libero in the world, Fabi, who is a two time gold medalist and the starting libero; for the Brazilian Olympian team. They were coached by the most respectable Brazilian men's volleyball coach. After the match we got to take pictures with some of the players and got a team photo with Courtney. We waited for Thompson to shower and then left for the Brazilian steak house. On the way there we asked Courtney questions about her volleyball story. It was very inspiring to us all. She explained how hard she had to work to get to that high level of volleyball. Thompson also told us about her day to day training schedule. Once we got to the steakhouse we got to eat with her and ask her some  more questions. Courtney was very friendly and shared her story openly. We finished eating and took one more group photo with Courtney and then said our goodbyes.

This morning we ate breakfast at the hotel around 10 before we started our walk towards the beach. Once we got to the beach Jing generously to take all of our pictures for us; since it was dangerous to bring our phones. The beach was not quite what we had imagined; one side was buildings and stores and then right across the street was the beach and ocean. However it was very pretty and lived up to the pictures we had seen prior to going. We got to  swim in the ocean and lay out on the beach for about 3 hours! The Brazilian beach was different because there were tons of venders constantly trying to sell you things such as hammocks, bracelets, and sunglasses. While laying on the beach we had the opportunity to experience natural coconut water straight out of the coconut.

After the beach we had a delectable lunch by the beach. We had a variety of choices to chose from, such as salmon, chicken, or ressoto. After a great lunch and great conversation with the team we returned back to the hotel and got ready to play.

Sent from my iPhone