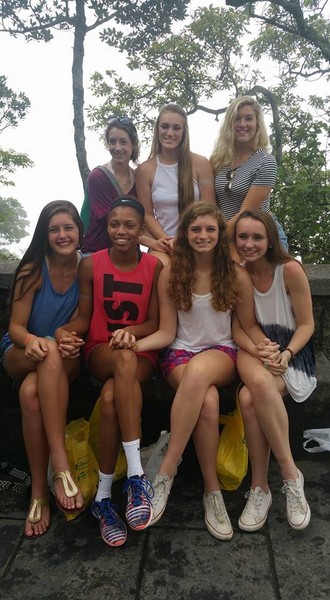 November 27, 2015 - We ended our Thursday evening with a match against a team from the Tijuca Tennis club. The gym in which we played was open to the outdoors. We played in the 81 degree heat with direct sunlight in our eyes and only about five to six feet of space outside of the edges of the court, which was difficult on both our back row and jump servers. Regardless of being unaccustomed to competing in such conditions, we played with good humor and, in the words of Bob, "played our best game yet." After the hard-fought match we sat down for an all-you-can-eat meal and headed back to our hotel for a good night's rest.

On Friday morning, after eating an early breakfast at the hotel, our team loaded into separate taxis for a once in a lifetime experience. We were on our way to visit one of the seven wonders of the world: the statue of Christ the Redeemer. When we arrived at the bottom of the mountain we spent time perusing artwork and tourist merchandise before boarding the train to the statue. The twenty minute ride up the mountain to the statue was indescribable: to call it breathtaking would be an understatement—and the pictures we took could never do it justice. After exiting the train we climbed three hundred stairs to find the statue concealed in a thick fog. Albeit slightly disappointed, we didn't forego the opportunity to take both individual and team photos with the base of the statue (and later, its outline, which could be seen after the weather cleared up a bit). After spending some more time taking pictures around the statue and shopping for souvenirs for our family and friends back home, we boarded the train once more. On our ride back down we kept our eyes glued to the gorgeous view of indigenous trees, exciting wildlife, and a birds eye view of Rio. When we reached the bottom we piled into separate taxis and headed back to the hotel. Upon our arrival, our tour guide notified us that the beach volleyball practice had been canceled. The trainer that was supposed to be leading the session had received unexpected but exciting news: his wife was in labor. Despite this, we still planned on visiting the beach. After changing into our swimsuits, we left the hotel to eat a quick beachside lunch at a Brazilian style eatery. We spent about two hours at the beach, which gave us the chance to shop from local beach vendors, swim in the water, and most importantly, tan in the hot Brazilian sun. Even our coaches Gabe and Scott hit the water to go body surfing with some of the players. If you ask Jing whether or not the group succeeded in body surfing, he will respond with the following: "They pretty good . . . Scott, though, pretty bad." Later today, we will drive a little farther outside of the center of the city to visit a high-end mall, where we will shop, have dinner, and watch the very last movie of the Hunger Games Series . . . during which many of us may shed a tear or two.