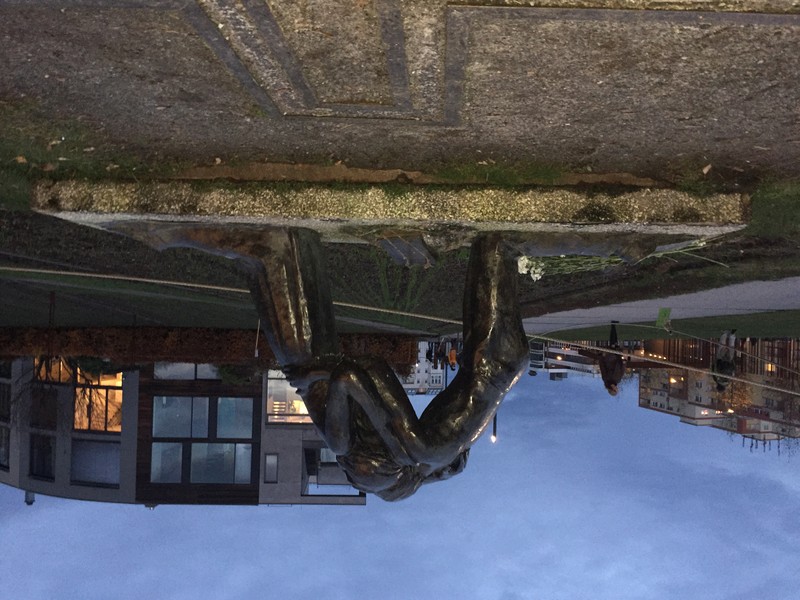 We started off our day with breakfast at the hotel, which, unlike the traditional American spread, was diverse and extensive. One whole table was devoted to bread, jelly, and cheese, one contained a yogurt bar complete with muesli, pumpkin seeds, and other toppings, a smaller table was laden with German meats and scrambled eggs, and a long table contained different teas and juices. After breakfast, we took the train to the gym, which is one of the sites that the German Olympic team uses to train. The school that the gym was at was a sports school, so several of the girls on the club team we played lived and went to school on campus. We played four sets, winning all of them and progressively increasing our cohisiveness as a team on the court. After our match, we took a tram to Alexanderplatz, the central train station for Berlin. There, we split up in groups of five and ate lunch at different venues throughout the station. We then met Sigfrid, a native German woman, who led us on a riveting tour around the central part of Berlin. Our stops included the German Chancellory, Parliament building (called the Reistag), Brannonburg Gate, the Gypsy Holocaust memorial, the Memorial to the Murdered Jews of Europe, and part of where the Berlin Wall used to stand. The strip now lies in the middle of the street surrounding the Brannonburg gate, and is so innocuous that one can step from what used to be West Germany to what used to be East Germany without even noticing it. Our tour concluded at the Mall of Berlin, a huge five-story complex with two connecting buildings that houses a multitude of stores and restaurants from around the globe. We shopped for a while and then moved on to a traditional German pub where we had authentic German food such as pork knuckle, Beef goulash, and liver dumpling soup. We concluded the day with a tram ride back to the hotel, where we all crashed and prepared for the upcoming day.

Once again, we began our day with breakfast at the hotel and a match at the same gym. We won the match at 4-0 again, exchanging t-shirts and taking pictures with the German club team. For our next step, we returned to Alexanderplatz where we ate lunch again and headed to the hotspot tourist destination, Checkpoint Charlie, that was complete with pictures with fake American soldiers (that were really dressed-up German actors) that you had to pay for...what a ripoff! For our next stop, we headed towards a small Berlin Wall museum where we were to watch two short documentaries on the history of the wall. Meanwhile, Bob was having a very eventful day. Earlier, as we returned to the train station from the gym, some guys who were looking for a cheap thrill lit a firework behind Bob, who was at the end of the group. It was harmless, but was loud and expelled a puff of smoke that startled the group. We hustled to the train station, where we thought we were safe. We were, but Bob's hat was not, as it was torn from his head by a gust of wind. Simultaneously, as if from a movie, an approching car ran right over it. Bob was quick to save his beloved headpiece and had it safely back in his hand in a flash, even if it was somewhat squashed. Finally, to conclude the trilogy of his misfortunate events, Bob was caboosing the group once again as we hustled on to the tram (en route to the Berlin Wall museum), and was left behind as the doors to the train shut right in front of him. Fortunately, he knew our destination and recieved a hearty welcome from the team when he arrived at the platform. The most exhilarating part of the day behind us, and after watching the documentaries, Bob's wife, Barbara, shared a heartfelt story about how the wall personally affected her family. We then continued outside where a stretch of the actual wall and some of the framework still stands. In this public memorial lies the foundations of buildings, including the semi-famous Church of Reconciliation, torn down to accomodate the wall and Death Strip, a wide zone between the inner and outer walls that is often referred to as No Man's Land. Our submersion into Berlin's extensive history concluded at the East Side Gallery, a mile stretch of artistically famous murals painted directly onto surviving portions of the wall. Aftwerwards, we ate dinner at Vapiano's, a trendy and delicious Italian restaurant, and grabbed dessert at a nearby gelato store on our way back to the hotel. Tonight, the team is relaxing at the hotel and preparing for a seven-hour drive to Krakow, with a pit stop for lunch and a match against a local Polish team. If you want to follow our journey as it occurs, follow us on Snapchat at a5vball or get occasional updates on our Twitter or Instagram!!