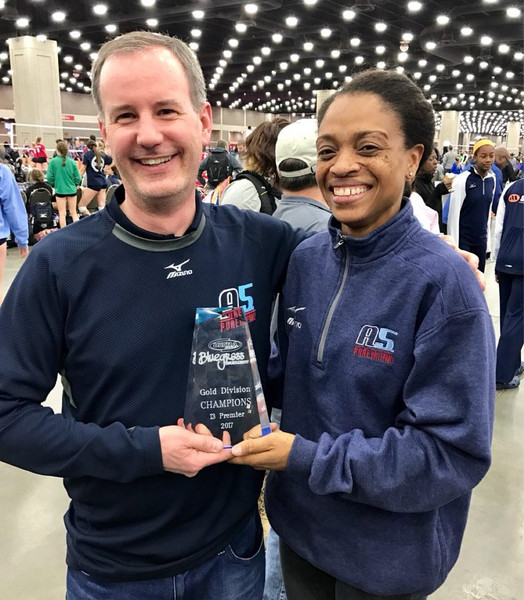 September 6, 2018 - Earl has been with A5 for 12 years coaching many of our 13, 14 and 15 year old teams.  Earl coached our 13-1 team last year and had a very successful season, earning a Gold Medal at Big South in 13-Open.  While at A5, Earl has earned a multitude of Qualifier bids, and was one of the first coaching consultants in developing and the 3rd Set of Eyes internal coaching improvement program.  Before coaching with A5 Earl coached collegiately with Radford University as an Assistant coach from 1994-1999.  Earl was also a Referee from 1989-1994 officiating USAV Adult and Junior tournaments, as well as women’s NAIA college matches.  We are very excited to have Earl coaching in our 13’s age group again this year!

Megan Barnes will be assisting Earl for their 8th season together.  Megan has been an integral part of team development with Earl over the years at A5, helping a number of teams medal and earn bids for USAV Nationals.  Megan and Earl met at Virginia Tech where Earl was a volunteer assistant coach and Megan was a standout 4-year starter middle blocker. They both developed a passion for the game and learned the fundamentals of playing and coaching and some lifelong habits (neither can stand being late because of one of their coaching mentors). After a number of years in different cities and coaching for different clubs, they reconnected and started coaching together at A5.  At Virginia Tech, Megan finished her career 2nd all-time in total blocks, ranked top 10 career in total blocks, single season total blocks, ranked 4th for career block solos, and holds the record for volleyball standing vertical leap since 1996.  We are excited for one of the top duos at A5 to be working together again!