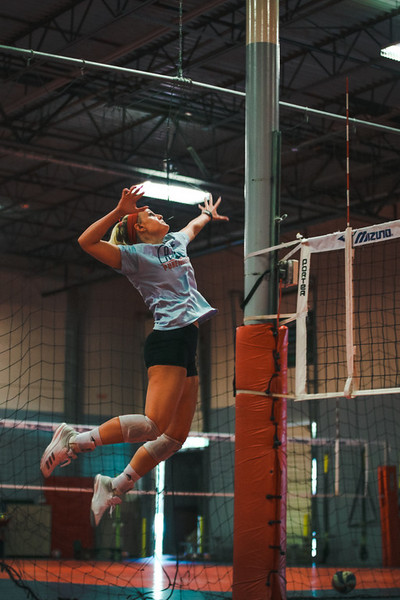 A5 alum Allie Davenport has signed her second professional contract with Val-de-Travers Volleyball Club out of Switzerland. Allie had an impressive rookie season in Lund, Sweden, where she finished second in the league in total points (339) and points/set (5.3) and fourth in the league in total aces. Davenport has high hopes for the 2019-2020 season as she adds another year of professional volleyball to her resume.
“I’m very excited for the opportunities this season brings. Sweden was an incredible experience and a great start to my career as a pro. Switzerland is a tougher league than Sweden, so I’m excited to take this step up and I hope I continue to show what I can do in a better league!”

Before beginning her professional career in Europe, Allie spent a year in London playing for the University of East London while pursuing her masters degree in Media, Communications, and Global Development. Davenport helped UEL finish as the number three team in the British Universities and Colleges Sport (BUCS) League.

Allie played three season at A5 from 2010-2013. Led by coach Gabe Aramian, Davenport helped her team earn an American national championship in Atlanta in 2011, where her team went undefeated. Allie scored the match winning point and was selected to the All-Tournament Team. Allie also was a four year letter winner at Sandy Creek High School out of Tyrone,
Georgia. Allie won two state championships at Sandy Creek in 2011 and 2012, and was voted4A Georgia Player of the Year. Allie holds several records at Sandy Creek, including most career service aces (436), most career kills (1,459), most single season kills (645 in 2012), and most kills in a single match (24 in the 2012 state championship).

Prior to starting her career in Europe, Allie was a four-year starter and six rotation outside hitter at the University of Tennessee at Chattanooga, where she received a Bachelors degree in communications with a minor in sociology. Allie was voted team captain in 2015 and 2016 and led her team to a regular season Southern Conference Championship in 2015 and a second place finish at the SoCon tournament in 2016. Allie finished her career ranked 6th in kills in UTC program history (1,065), 3rd all-time in career aces (142), and as the fifth all-time scorer at UTC (1,372.5).