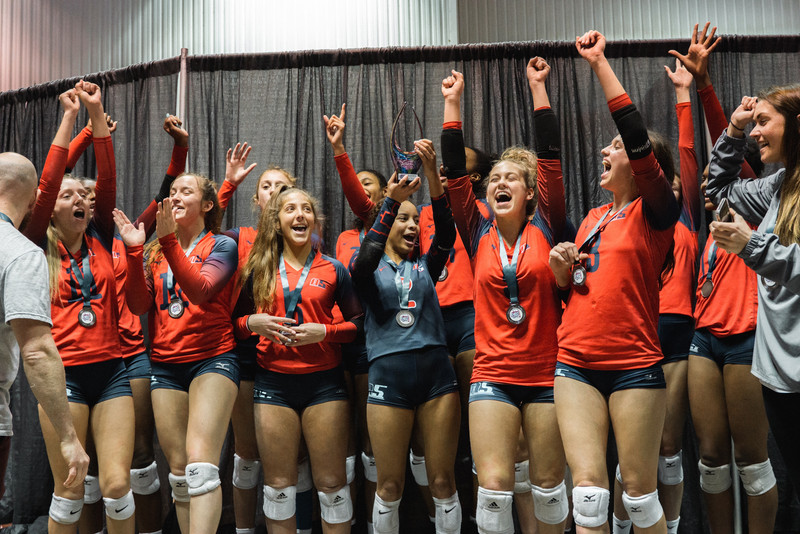 A5 16-Gabe - Champions of the 2020 Central Zone Invitational Tournament

January 28, 2020 - Our second weekend of indoor play found us in Atlanta, Orlando, Tennessee, and Indianapolis.

Five of our teams competed at the Central Zone Invitational tournament in Indianapolis - one of the toughest pre-qualifier tournaments in the nation with over 700 teams competing across multiple age groups and levels. In the highest-level Open division, A5 17-Jing and A5 17-Kelly tied for 5th in their age group, while A5 16-Gabe won the 16 Open division.  A5 Bob Westbrook's 15-1 team won seven matches in a row, before losing in the championship match to a tough Michigan club, to take 2nd place in 15 Open.  In the 14-Premier division, A5 14-Earl swept the table, going 8-0 in matches and 16-0 in sets to win the 14 Premier championship.

Even in the Premier Division, one of the great things about traveling to the Central Zone tournament was the variety of opponents.  Earl's 14-2 team played teams from Michigan, Ohio, Indiana, and Memphis TN, none of which are in our Southern Region.  A5 Coaching Director Gabe Aramian talked about the importance of traveling to the Central Zone tournament.  "The Central Zone uses a format designed to give us the most matches possible - most of our teams played 8 matches in just two days.  The Central Zone is the best preparation possible for February's Triple Crown National Invitational Tournament in Kansas City.  The Triple Crown tournament started as a bit of an experiment, bringing together the top clubs from the entire country to compete before qualifier season begins.  Now, it's seen as a must for all the top clubs in the U.S. - although it can be a rude awaking for clubs unprepared to play at the highest level available in the country".

Outside Knoxville, TN, the K2 Elite tournament is also an invitational, in order to keep the level of competition uniformly high. Nevertheless, A5 13-Allison won the 13 Open division, A5 13-Karen finished 5th while playing up a year in 14 Open, A5 16-Stephen lost a close championship match to finish second in 16 Open, and A5 17-Danielle finished in third place in 17 Open.

Our A5 boys were busy this past weekend too.  At the Florida Fest in Orlando, A5 16-Angel narrowly missed earning a bid to nationals, while finishing 3rd in the 16 USA division.  A5 18-Carlos finished 11th in the 18 USA division.

Locally, coach Donna Lamb's A5 12-3 team was the only A5 presence at the Rally Challenge in Emerson, Georgia. "Donna's Llamas" finished in 5th place, while A5 Chattanooga's 12-Dan won the tournament.  Fun fact: before moving to Chattanooga, Dan Clotfelter started A5's 12-and-under youth program over 10 years ago!

Next weekend many of our teams are in action in Knoxville, while other athletes, including our club's youngest teams, will play in Atlanta at the Icebreaker Tournament.  How young are our youngest players, you ask?  Our A5 10-Eric team includes only FOUR 10-eligible athletes - along with FIVE 9-eligible athletes, and two 8- and 7-eligible athletes!  When our athletes start that young, A5's future looks bright indeed!  Good luck and safe travel to all our teams!