A5 teams in four states this past weekend 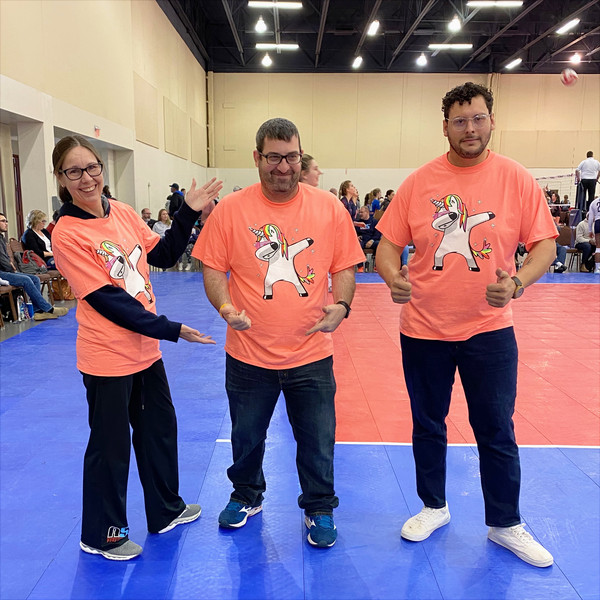 Coaches from A5 16-Scott show off their dabbing unicorn shirts

February 3, 2020 - On our third tournament weekend of the season, about half our teams saw match action, either in Atlanta or at several tournaments out of state.  At the Northern Lights qualifier in Minneapolis, playing in Open division, A5 17-Jing was 6-0 on the first two days, dropping only one set (and that to A5 South 17-Joe).  On day 3, Jing beat Houston Juniors in their Gold pool but lost to OT (Orlando-Tampa) in a close 3-set match, then lost their final match that decided 3rd and 4th place - unfortunately, only the top three finishers earned bids to USAV Nationals.  A5 South 17-Joe tied for 5th in another very strong showing.

Only slightly closer to home, A5 18-Jordan played in the Ohio Valley 18's Qualifer, held in Columbus, Ohio. Playing in the USA division, Jordan's team was 5-3 overall, but two of their three losses were to the same team, a strong NOVA Juniors team from Akron that finished 3rd overall.  Knocked out of contention by NOVA in a close 3-set match, Jordan went on to finish 14th overall.

Eight of our teams made the drive to the Knoxville, Tennessee area to play in K2's Wilderness at the Smokies tournament held at the Sevierville Convention Center.  A5 13-Betty ran the table on day one in straight sets to keep the "1" seed for Sunday's Gold bracket.  Despite some strong competition and some 3-set matches on Sunday, Betty's team won the championship in 13 Power.  A5 12-Jake dropped only one set (to A5 11-Walter) on the way to their championship in 12 Power. A5 15-Victor fell in the championship match, their only loss on the weekend, to finish 2nd in 15 Power.  Also of note was A5 Gwnnett 17-Tim, who dropped only one set on the way to their championship in 17 Power.

Locally, at the Icebreaker tournament played at the Suwanee Sports Academy, A5 teams took five championships as well as three runners up.  A5 18-Scott won their Open divison championship and A5 15-Javier won the 15 Club divison. Playing up two years, A5 14-Helen won the 16 Open/Club divison, losing the only set of the weekend in the finals against A5 15-LA. A5 14-Bri went 10-0 in sets to cruise to the championship of the 15 Club/14 Open division, while A5 12-Mercedes won four matches in a row on Sunday to take gold in the 12 Club division.  A5 18-Boba, A5 15-LA, and A5 11-Erin all finished in 2nd place - each losing to another A5 team in separate all-A5 finals.

You can see championship photos on our club's website here.

Next weekend, in a light stretch of tournament play for our club, A5 12-Jing will head to the Jacksonville Jam in Florida, while our boys teams will conclude their Fall/Winter season at the Denis Lafata Boys Bid tournament in St. Louis.  Conclude?  Yes, the boys schedule is split, with a fall/winter season followed by a break of several months.  They return in May for the championship season, with potentially different rosters, as they will go through a fresh tryout process on April 19th.  We hope to field 18's, 16's, and 14's boys teams this Spring.

Photo:  Scott Cioffari (A5 16-Scott, center) along with his assistant coaches, Tina Marstellar and Carlos Soler, promised their players that they would go through with a dare to wear dabbing unicorn shirts if the team made it to the gold bracket on Sunday.  Obviously that was motivation enough for those 16's athletes!