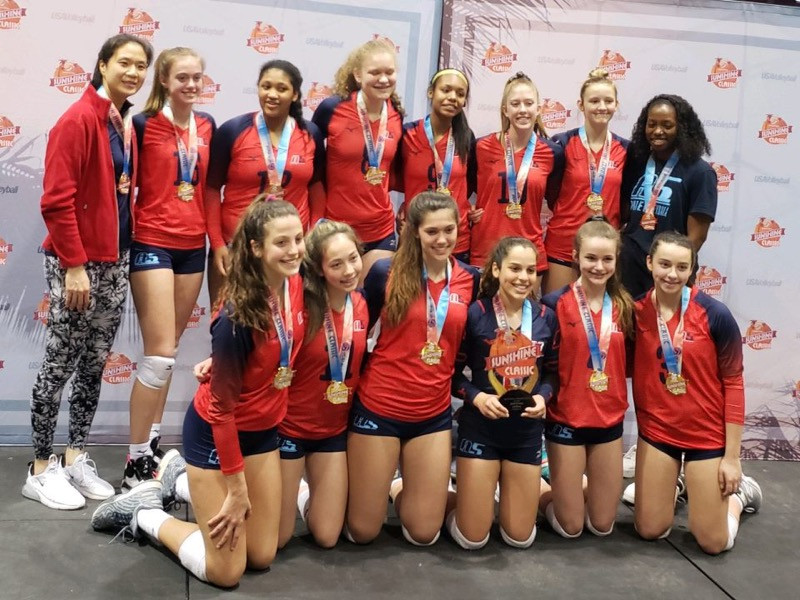 March 11, 2020 - It's that time of year where our long hours of practice and conditioning are starting to pay dividends - this weekend was a great start to the qualifier season for A5 Volleyball.  Most of our top teams were in Orlando for the Sunshine Qualifier, a 3-day affair with the top clubs from the eastern U.S. in attendance. The goal:  Finish in the top of your division to earn a bid to USAV Nationals in Dallas this summer!

Our 14-Helen team, playing in the Open division, had to play matches against a veritable "Who's who" of volleyball - Mintonette, Excel, Skyline, Rockwood Thunder, and Orlando Tampa, among others.  That didn't stop Helen's team from running the table, dropping only a single set in the finals before beating Orlando Tampa 15-13 in the third set to clinch the tournament championship as well as an Open bid to USAV Nationals.

Our 17-Jing team won nine matches in a row, all in straight sets, before falling to TAV in the finals, but their strong second place finish was enough to secure an Open bid as well.  16-Gabe had a similar result, making the Gold bracket finals only to lose a close match 25-23, 25-23 to Skyline, finishing 2nd overall to punch their ticket for Dallas in the Open division.  16-Stephen's 3rd place finish was good enough to earn a bid in the 16 USA division, while our 18-Jordan team rallied from a tough loss in the quarterfinals to win both consolation matches in straight sets and earn a bid in the 18 USA division.

Meanwhile at the Northeast Qualifier in Baltimore, 18-Scott went 9-0 over three days, beating clubs from the east coast to the west coast, to win the 18 Open championship.  Scott's team had already earned a bid to Nationals at the Beast of the Southeast, making those athletes our first team of the year to double qualify!

A5 is now up to 6 bids earned for Nationals in Dallas.  Watch for that count to grow over the next few weekends as our older teams will attend qualifiers in St. Louis, Denver, and Indianapolis between now and mid-April, when  we'll have a record 29 teams attend the Big South National Qualifier here in Atlanta.  Stay tuned!