A5 moves into new flagship facility

A5 Sportsplex is now in operation 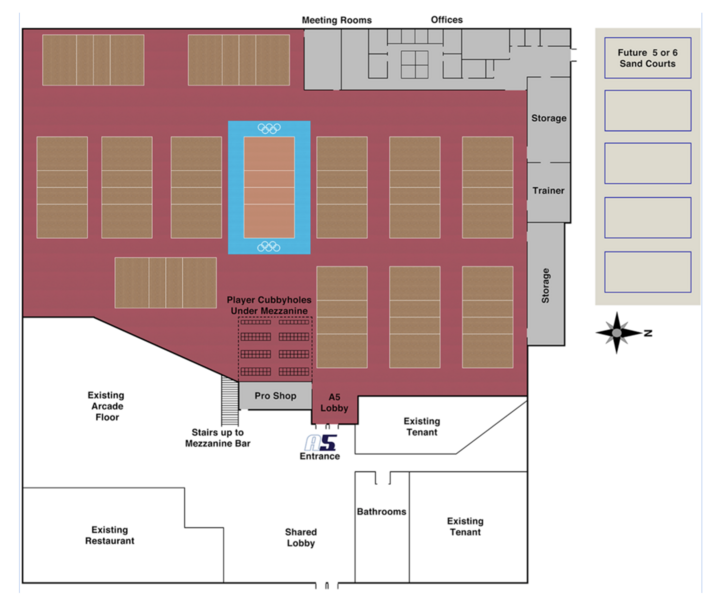 A5 Sportsplex in Roswell, GA

September 11, 2020 -
In 1976, Bob Westbrook was sent to Atlanta to start Junior Volleyball. Back in that day, junior age girls teams competed against women's teams. There were no other junior teams in Atlanta, and only a couple in the South. Bob continued to coach in Atlanta all through the 80's and 90's in school and church gyms until it became clear that it was time to start something new.

This "new" club would be centered on a solid training methodology, travel guidelines scheduling for success, an overall commitment to create a template derived from the observations of the folks he worked with and trusted, and from studying best management programs from the top programs in the country. This work and approach resulted in the formation of the A5 Volleyball Club in 2004. Bob did not do this work alone by any means. The core leadership group including Phil Bush, Anna Bush, Bayne Tippins, Jeff Choe, and Dale Smith, along with Bob, became "Plank holders" of this fledgling club. This group formed a non-profit corporation named A5 Volleyball Club dedicated to creating a different club volleyball experience in Georgia.

Over the years, A5 grew from eight teams to over sixty-five teams training in four different locations. One of the keys to this growth was the opening of the Southern Volleyball Center in 2010, led by Michael Fletcher, Bob, and others. With five courts at the SVC combined with four courts at The Cooler, A5 no longer had to rely on churches, schools, and YMCA's for gym space. Having dedicated facilities gave the club the ability to keep growing. That same year, A5 added 11's and 10's age group teams which paved the way for more young athletes to fall in love with the sport.

Now in 2020, A5 is thrilled to move into our new flagship facility, formerly Andretti's Indoor Karting and Games.  The A5 Sportsplex includes 13 volleyball courts, as well as a pro shop, team meeting space, offices, conference room, trainer’s room, kitchen, and storage spaces.  Players will be able to keep their belongings organized in the cubbyholes under the mezzanine.  The restrooms off the lobby are shared with the existing restaurant and bar, and include 12 stalls in the women’s restroom.  The facility also includes over 500 parking spaces.  Future plans include the installation of 5 or 6 sand volleyball courts along the southern edge of the complex.

The 13 volleyball courts in the A5 Sportsplex are all floored with Taraflex Sport, including a Championship Court with extra space for grandstands and spectators.  The Taraflex product offers superior sports properties to athletes when considering shock absorption, sliding and diving, and overall comfort, helping prevent both short and long-term injuries for all levels and ages of athletes.  Best of all, our Championship Court is the actual flooring used in the 2016 Brazil Olympic Games!  The floor was reclaimed by Taraflex after the Olympics and stored in their warehouse, and has now been installed in our facility.

A new chapter of A5 history begins... we hope you'll come and be a part of it!