4 bids earned by A5 at Sunshine Qualifier 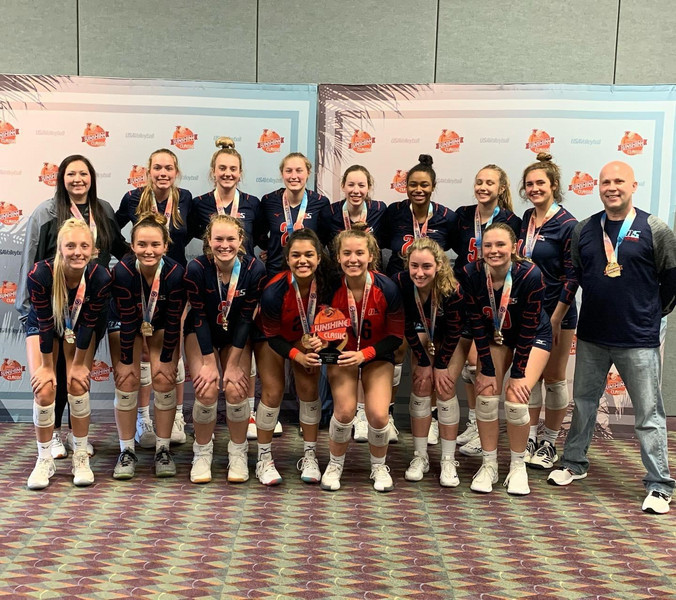 A5 17-Kelly wins the 17-USA division at the Sunshine National Qualifier in Orlando, earning a bid to USAV Nationals

March 17, 2021 - Our 18-year-old teams started their qualifier season in January, due to their shortened season.  But for most of our teams, the Sunshine Qualifier in Orlando was our first chance to try to earn a bid to USAV Nationals, and to play talented teams from across the country, relatively close to home.  Due to the size of the Sunshine Qualifier, it was split across two weekends, with younger teams playing March 6-8 and older teams playing March 12-14.

Our younger teams found tough competition across the board, playing against teams from regions such as Florida, Puerto Rico, and Texas where volleyball begins at a much younger age.  For example, Puerto Rico offers teams and tournaments for players as young as age 4!  That puts our club at a disadvantage for a few years, until our strong training methodology, disciplined approach to the sport, and superior coaching cadre eventually level the playing field.   Still, several of our teams found themselves staying in contention until the last day of the tournament.  A5 13-Betty finished 3rd in 13-American, our only podium finish among our younger teams.  A5 11-Walter finished 5th in a strong 11-National division, while A5 12-Jake finished 9th in 12-American.  A5 13-Karen and 14-Helen both finished in 9th place in tough Open divisions, the highest level of competition available.

On the second weekend of the Sunshine Qualifier, our older teams made a most impressive showing, led by A5 17-Kelly, who won the 17-USA championship to earn a bid to USAV Nationals.  Bids were also earned by 16-Gabe, who finished 2nd in 16-Open, by 16-Marc, who finished 2nd in 16-USA, and by 15-Bob, who finished 2nd in 15-Open. A5 17-Missey took 3rd place in 17-American, good enough for a podium appearance and bronze medals, but just one position out of earning a bid.  A5 17-Jing similarly just missed a bid by finishing 4th in 17-Open.  A5 15-Victor finished 4th in 15-USA and 15-LA finished 5th in 15-USA.

A few of our teams will head to St. Louis at the end of March to the Mid East Qualifier, while the bulk of our top teams will await the Big South National Qualifier in Atlanta the first weekend in April. With these and more qualifiers ahead, the A5 bid count is sure to continue to grow!