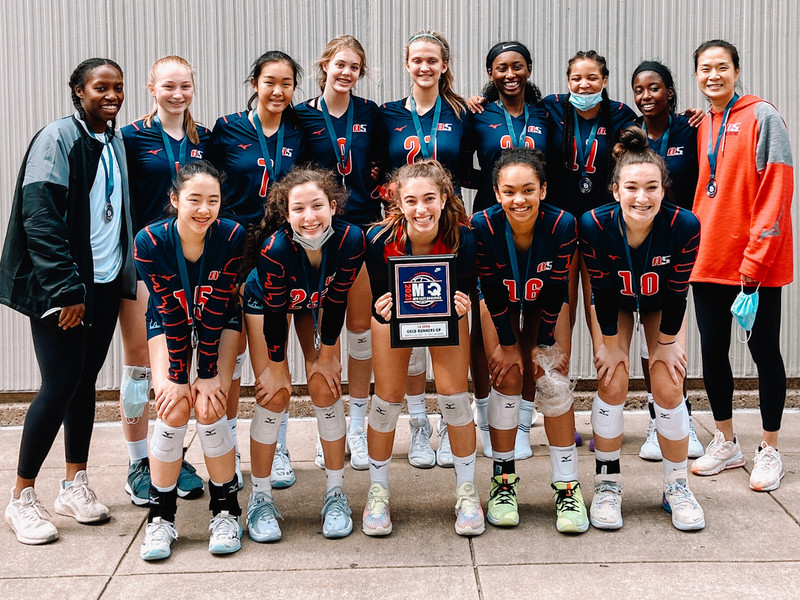 In Louisville, 17-Jing played 10 matches in 17 Open over three days, winning 8 of them and making the finals, where they fell to a strong Drive Nation team from North Texas - those Dallas area teams are real trouble!  Jing lost 15-12 in the 3rd set of the championship match, but the second place finish was enough to earn a bid in Open division. 17-Kelly had already earned a bid so they were also playing in the Open division and finished 13th.  17-Missey had a strong showing finishing 5th in 17-USA, just barely out of reach of a bid.

A5 15-LA got off to a hot start in St. Louis, winning 8 matches in a row, all in straight sets, before falling in the semifinal match against Momentum from Colorado.  Their 3rd place finish earned 15-LA a bid to Nationals in the 15-USA division.  A5 14-Helen went 8-2 on the weekend, winning out against a true 'who's who' lineup of opponents, including Union, Boilers, Northern Kentucky, Dynasty, Skyline, and TAV.  Helen's team lost in the finals to finish 2nd in 14-Open, earning a much-deserved bid to USAV Nationals.  A5 12-Jing finished 5th in 12-National, and A5 13-Karen finished 13th, both teams just out of bid reach.

Over the March 27-29 weekend, 18-Scott and 18-Boba flew to Philadelphia for the Northeast Qualifier, with both teams playing in the Open division.  18-Boba went 6-3 on the weekend, finishing in 7th place, while 18-Scott went 8-1, losing in the finals to TAV (another Dallas area club).  18-Scott's second place finish made them "double qualified" for USAV Nationals.

Next up for A5: Atlanta's Big South National Qualifier, over the April 2-4 weekend.  Big South is the nation's largest girls qualifier - you have to see it in person to understand what several hundred courts under one roof looks like.  Because it's in A5's backyard, we'll be sending a whopping 33 of our teams to play, plus more from our sister clubs.  Stay tuned!