An astonishing 63 A5 teams take part in Big South 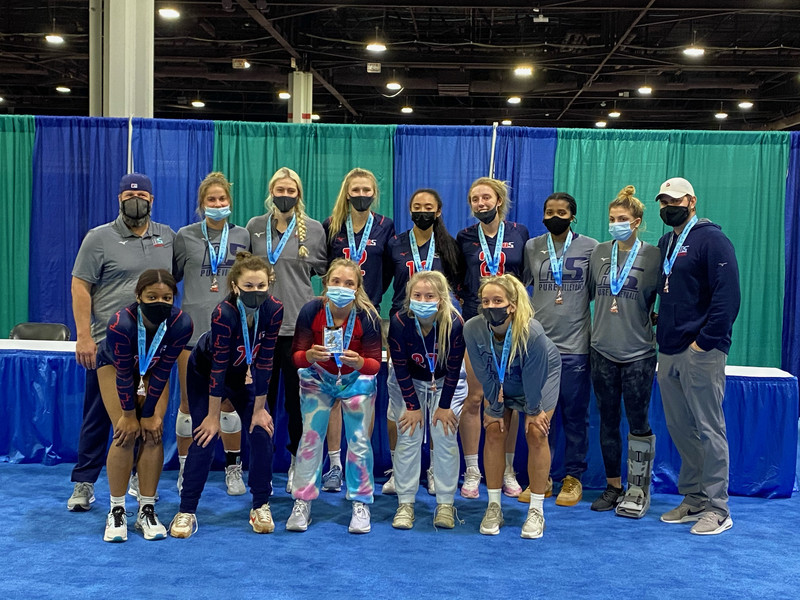 April 13, 2021 - The Easter weekend of April 2-4 brought the Big South National Qualifier to the Georgia World Congress Center in downtown Atlanta - literally the best competition our club can get in our hometown.  Big South is billed as "The nation's largest girl's qualifier held over a single weekend", with almost 1,600 teams participating over the 3-day tournament.

Having the chance to play qualifier-level competition in Atlanta is a huge opportunity for our club, and we took full advantage of it.  While most clubs send 5 or 6 teams to a National Qualifier, A5, including our sister clubs, had an astonishing 63 teams participating in Big South.   And while it's amazing to have so many A5 teams playing in a single tournament, the sheer size of Big South meant that only 4% of the total teams were from A5. In a very welcome change from a typical local tournament, that meant most A5 teams finished the weekend without ever facing another A5 team across the net.

Where typically only a few of our top teams truly attempting to qualify for USAV nationals might attend a distant qualifier, Big South gave all our teams, from the most experienced to the newest athletes, a great opportunity to face strong opposition from other regions without the need to travel.  Still, A5 managed a winning 259-225 record across the three days of competition, playing 484 matches in total - that's a LOT of volleyball!

Despite the size and variety of competition, our top teams at all age groups still managed some impressive results.  Our A5 18-Scott team finished 3rd in 18-Open, enough to TRIPLE-qualify for USAV Nationals, having already received an 18-Open bid at the Florida National 18's Qualifier and then double-qualifying in the Northeast Qualifier in Philadelphia.  Similarly, A5 16-Marc finished 3rd in 16-USA, double-qualifying as well, and A5 15-Bob earned their second bid by taking 2nd place in the 15-Open division.  A5 14-Helen also double qualified by taking 3rd place in the 14-Open division.  Our A5 15-LA team, having already secured a 15-USA bid at the Mideast Qualifier in St. Louis, played in the ultra-competitive 15-Open division at Big South, finishing with a strong 7-2 record, good enough for 19th place.

In the 14-American division, our 14-4 and 14-5 teams - levels not typically destined for qualifier greatness - both made deep runs in a competitive and large field of 127 teams.  A5 14-Kip went 6-1, finishing in 9th place overall, while 14-Tina posted an impressive 8-1 record to finish in 5th.  No other team from any club in any age or division had a "5" team finish as high as 5th place!

In 13-USA, both our A5 13-Earl and A5 13-Betty teams finished tied for 5th, just out of bid contention, but with 6-1 and 5-2 records, respectively.  Our 12-Jing team went 7-1 over three days in the 12-National division, only losing in the finals to Mad Frog from Dallas, to end up in 2nd place - good enough for silver medals, but just out of bid contention.  Similarly, A5 11-Walter made it to the 11-National finals before losing a tough 3-set match to Rockwood Thunder from St. Louis, settling for 2nd place and silver medals, but no USAV bid.

Finally, special recognition goes to our A5 10-Jon team, who ended the weekend with a 2-4 record, beating two pretty good Florida clubs and getting great competition over two days of match play.  What's remarkable about a 2-4 record?  Of the 1,598 teams participating in this National Qualifier from 285 clubs in attendance, Jon's A5 10-1 team was the ONLY team at Big South that was playing "UP" an age level, as they competed in the 11-National division. The future looks very bright for that group of athletes - and for our club in general.

Next up for our 18's teams is the USAV 18's Nationals in Columbus, Ohio, held earlier than the rest of the age divisions to allow those athletes to begin preparing for college volleyball.  For the rest of our club:  Our SRVA Regional Tournament, which is the final opportunity for many of our teams to earn a bid to USAV Nationals in Las Vegas, as well as the end of a wonderful season for some of our youngest teams!

All of our teams are encouraged to give back to the community by undertaking a community service project that may or may not have anything to do with volleyball.