77 A5 teams competed this past weekend at Regionals 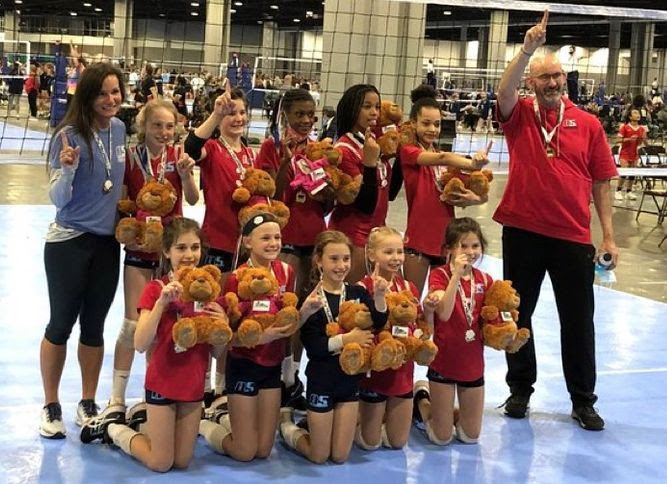 A5 10-Jon wins the 11-Club championship at SRVA Regionals

April 29, 2021 -
This past weekend was the final tournament of our regular season:  The Southern Region Volleyball Association (SRVA) championships, better known simply as "Regionals".  For some of our teams, this was the final chance to try to earn a bid to USAV Nationals in Las Vegas.  For our other teams playing in a non-bid division, this was simply a final chance to play together as a team and make a strong finish to a great season.

With A5, A5 Gwinnett, A5 South, and A5 Chattanooga all competing, A5 had a total of 77 teams at Regionals, while many of our "1" and "2" teams sat the tournament out as they already had a bid in hand to USAV Nationals.

6 teams swept Regionals by winning all of their matches and finishing the regular season with a championship in their division.  A5 13-Karen won a National Division bid to USAV finishing 7-0 on the weekend.  A5 12-Jing also earned their bid to USAV's 12-National division, beating a tough CCJ 12-1 team in the championship match to take gold.   A5 11-Walter and A5 11-Ada played in another "all-A5" final in the 11-bid division, with 11-Walter winning the championship and an 11-National bid to Las Vegas.

In the 13-Club division (non-bid), A5 Chattanooga 13-Sarah went 6-0 to finish with gold medals and a championship.  A5 12-Lori was 6-0 on the weekend, winning the 12-Girls division while dropping only a single set all weekend - an impressive result for our 12-6 team!  Our youngest age group found success as well, as A5 10-Jon played "up" in the 11-Club division.  They didn't drop a set on Saturday, and ended up winning a tough championship match on Sunday against Alliance 11-1, coming from behind after narrowly losing the first set.  Way to go Jon!

With many divisions offering multiple bids to nationals, we had some additional A5 teams qualify for Nationals this weekend, even if they fell short of a division championship.   A5 16-Stephen finished 2nd, with silver medals and a bid to Las Vegas, as did A5 14-Allison and A5 13-Betty.  A5 17-Missey won their bid finishing 3rd at regionals, as did A5 15-Victor and A5 14-Brianna. A5 14-Kip and A5 13-Earl each finished fourth in their respective divisions, securing their bids to Nationals.

Our A5 teams finished the Regional tournament with a combined 198-136 record across all divisions.  Congratulations to all our teams, and a huge debt of thanks for the hard work this season, for playing tough, and for wearing the A5 uniform.

A5, A5 Gwinnett, A5 South and A5 Chattanooga routinely send 40-50 players a year on to play in college.