Looking back on our amazing 2021 season 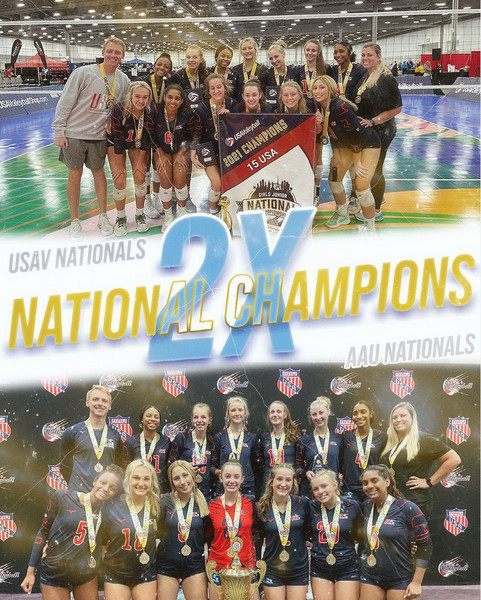 Congratulations to A5 15-LA, who won AAU and USAV National Championships - in the same week!

Hello A5 Family - our 2020-2021 season is now in the history books - and what a year it has been.  In a world that was filled with uncertainty, doubt, and "NO", we managed to be focused in the gym to consistently produce teamwork, camaraderie, and "YES".

Looking back just ten months ago, A5 was moving out of the Southern Volleyball Center, our 5-court home for the previous ten years, into the new A5 Sportsplex, with its 13 courts, LED lighting, and Taraflex flooring.  With the COVID pandemic still in the forefront of everyone's minds and plans, we weren't sure what demand would look like at our club season tryouts.  There was even doubt that we would have a "real" season at all, as many states, clubs, and facilities were not sure they would be able to host tournaments.

It turns out that demand for A5's brand of volleyball has never been higher!  We had record numbers of volleyball players at our 2020-2021 season tryouts, with over 160 athletes attending the 10's/11's/12's age tryouts, 130 at age 13, and a record 177 athletes at age 14.  Our older age tryouts for 15's through 18's were similarly full.   All told, we evaluated over 1,000 players for our indoor girls and boys teams, as well as 60+ athletes for our beach volleyball program.  We formed a record 46 teams at our A5 Sportsplex location in Roswell, and a total of 94 teams including our sister club locations at A5 South, A5 Gwinnett, and A5 Chattanooga.

While our teams trained hard and competed well all season, there were challenges, especially early on - positive COVID tests forced a number of teams to get tested, to await negative results, to juggle schedules, and to quarantine until they were allowed back in the gym.  Club-wide, however, the impact was thankfully relatively minor, as we were still able to attend and dominate tournaments both local, regional, and national in scale.

Beginning with the A5 Kickoff Classic in late January, the new A5 Sportsplex also proved a worthy tournament venue, as we had eight courts in use simultaneously, with the other courts allowing ample room for spectators.  Our tournament staff did a phenomenal job putting together and running our tournament series all year, increasing our club's visibility and showcasing our new facility.   Looking around the gym during our hosted tournaments, one couldn't help but realize that this is what our facility is meant to be - not just an amazing practice gym, but also one of the premier tournament venues in the Southeast.

Because of Orlando's relative proximity to Atlanta, A5 traditionally sends most of our top teams to AAU Nationals to have one last chance to compete at the highest level before USAV Nationals.  At AAUs this year, A5 had 32 teams in attendance, and finished with an impressive 160-48 record overall.  This included seven 5th place finishes, four 3rd place bronze medals, one 2nd place silver medal earned by A5 16-Gabe in the 16-Open division, and a national championship gold in 15-Premier by A5 15-LA, our "2" team.  Additionally, 17 A5 athletes were named All-Americans.

Just a few days later, a total of 20 A5 teams attended USAV Nationals in Las Vegas, where we finished with three 5th place finishes, a 3rd place Bronze medal finish in 17-Open by A5 17-Jing, a 2nd place silver medal by A5 15-Bob in the 15-Open division, and TWO national championships!  A5 16-Marc won the 16-USA division to bring home the gold, while 15-LA repeated their AAU performance by winning a second national championship at USAV, sweeping the 15-USA division with a perfect 11-0 record.  We had 12 A5 athletes named USAV All-Americans as well.

Our entire club breathed a collective sigh of relief as the season drew to a close - despite the initial uncertainty, we managed to have a full club season, while rising to meet and overcome the challenges along the way.   What's next for A5?  It's already happening - we are well into our camp and clinic season, with record numbers in attendance, and tryouts are less than three months away!  Thank you, A5 family, for your unwavering commitment to our athletes and to the excellence of our club.  We'll see you in the gym soon for the 2021-2022 season!