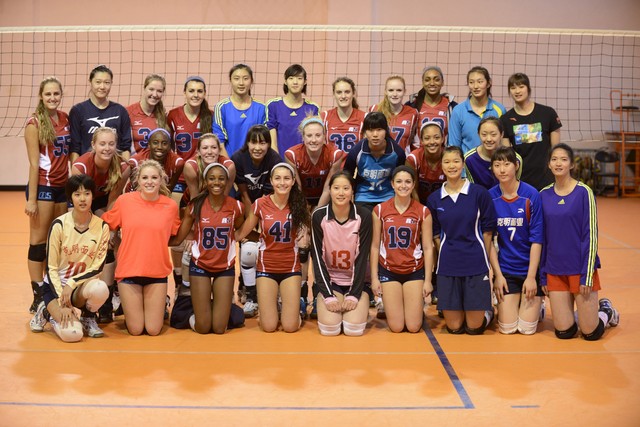 November 26, 2013 - Today we went to Tiananmen Square and the Forbidden City. Tiananmen Square is considered the Heart of China. It is the dead center of the city of Beijing. During the 1980s, students protested the Communist government in the square. It was very enlightening to be in a place filled with such incredible history. Today was the coldest day by far of the trip. It was 30 degrees, but with all the wind it felt like it was 5 degrees.

After we visited the Tiananmen Square, we walked across the street to the Forbidden City where we saw a giant poster of the first president of China, Mao Zedong. The Forbidden City was the emperor's house, so only him and his wives were aloud inside. There are 9,995.5 rooms in the Forbidden City. While we were touring we saw the emperor's bedroom and his garden, which was actually a bunch of rocks that you were not allowed to climb on. The highlight of the trip was when we went to the coffee shop to warm up because it was so cold outside, but when we got our hot chocolate we were very disappointed because it was small and not very hot. After we got our hot chocolate, we left the Forbidden City, and when we walked on to the street, a big group of people ran towards us. At first, we thought they just wanted a picture with us because we are tall American girls, but then they started to push us around. Our Chinese tour guide told us that they were trying to pick pocket us, so we had to walk back to the bus immediately.

After seeing the amazing Forbidden City and Tiananmen Square, the team went to eat lunch at a near by Subway restaurant. Soon after all the athletes along with the parents and coaches were finished eating, we headed down to a 101 school were we would be competing against two elite teams from Beijing. Our evening competition consisted of Jing Hou's (he is our 17's coach) former Club the Bayi Club and the 101 high school team. Our A5 China team fought hard in every set in each match. Although our team fought hard in two best three out of five matches, we fell short a couple of points at the last few minutes of the games. After a well fought game, everyone headed back to the hotel to prepare for another amazing day in China.

We offer a club environment where coaching is consistent from the first time a player enters a gym at the age of 6 through when he or she graduates from high school.