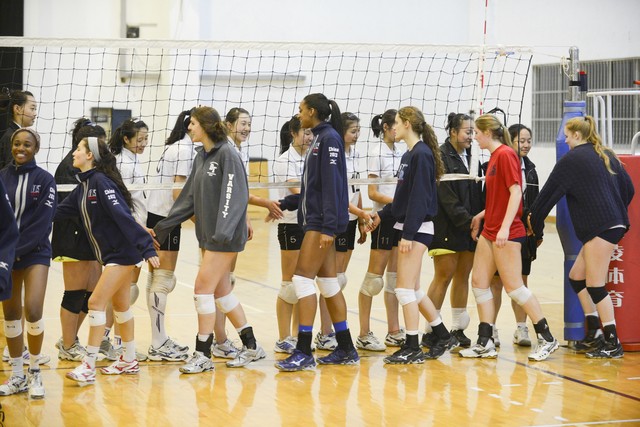 After the Sanzhong Sport School match

November 27, 2013 - Today was our last day in Beijing so we woke up extra early because we had to get to the train station. When we were leaving the hotel and getting on the bus a few street sellers tried to sell us a few of their products, as usual. Usually we keep walking and ignore them but this time a few players wanted to buy their chopsticks. Big mistake. After selling to some of us we were suddenly bombarded by a mob of street sellers.

We ran into the bus but that didn't stop them. They swarmed the bus and even tried to hop on. After basically fighting off the relentless street sellers we finally made our way to the train station. We boarded the bullet train to Nanjing which goes 195 miles an hour!

All the players got to sit in the fancy first class car of the train. It was very comfortable and with frequent naps the 3-and-a-half hour ride flew by. Directly from the train we took our bus to a local mall in search of some food.

After we got off the train, we went to an outdoor mall nearest to where we were playing because we were all starving. We found the food court with some help from Chris, but the food there was very traditional Chinese food like fried duck head, so we decided to go to Subway instead. Overall, the trip to the mall was very good. Nothing eventful happened at all. We had no complications whatsoever. We all stayed together so that nobody got lost or anything like that.

Next, we went to the gym. We practiced with a Chinese team for a little bit, but that was really hard because of the communication issues. The players didn't really understand what we're were saying in English, and obviously we didn't understand their Chinese. After about 30 minutes of practice, we played a match. We were strong in the first two sets and won, but the Chinese team took the next three sets. The match was pretty intense but so much fun. Surprise surprise, we took a lot of pictures after the match.

When we got to where we are going to be staying for the next few days, we went straight to eat without even taking our luggage off the bus. Everyone was so excited to eat, but then we saw the food that we were supposed to be eating. The menu consisted of pig tongue and cold duck. Most of us stuck with the white rice. After dinner, we were assigned our rooms. Since this is a government building, we have to return the keys. In order to be issues a key, you have to give them your passport. If you lose your key, they won't give you your passport back. We're all wondering who's going to be the first one to freak out because they can't find their key. This day had many new experiences, like the bullet train and the interesting cuisine. I can't wait to see what will happen tomorrow!