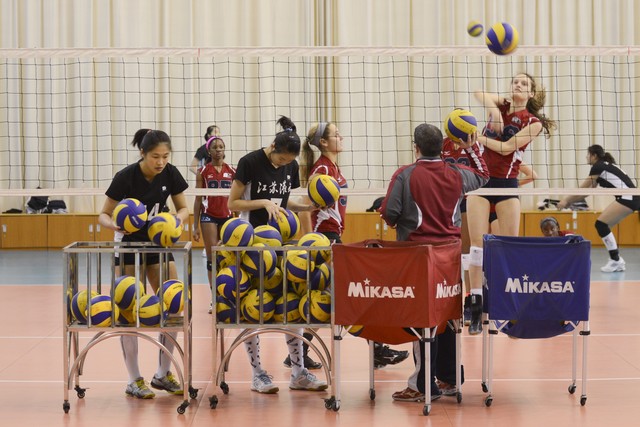 November 29, 2013 - We all woke up to the sun shining bright and cold wind chills. Breakfast was at 8:45. We had chocolate sponge cake muffins, oranges, fried rice, egg sandwiches, and apple juice. Training was from 9:30 to 11:30. We did our normal warm up and went straight into serve receive. The task was to get a hundred perfect serve receive passes. Accomplishing out goal, we got to play six on six BUT NO JUMPING. After training we ate in the cafeteria where we got to see and try a variety of food. Most of us had rice and chicken plus the snacks we had packed. Jing and Chris tricked a few girls by saying they ate snack but it was really just some rice and fruit rolled up with sprinkles on top. Lunch was pretty adventurous for us. We headed back to the hotel to pick up our stuff for the evening, then headed to the gym for our last game.

We got off the bus and a blast of cold air hit us from outside. We hurried inside thinking it would be warm. We thought wrong. Another blast of cold air hit us but this time we had to suffer through it. We warmed up as much as we could by playing some games and then got ready to play. The match started out with us playing well and winning the first game. We had really good serve receive and didn't make a lot of mistakes. In the next game the Chinese team came back strong and beat us. But for the third game we pulled through with a win with a bunch of kills and some good blocks. We had a five point lead in the fourth game but made some serve receive errors and other mistakes that, unfortunately, led to a loss and more time in the freezing gym. Fortunately, we played hard in the fifth set and won for the second time while we've been in China! After some pictures and goodbyes we headed back to the bus to drive over to dinner at the Blue Frog. To celebrate the great win the girls went out to the Blue Frog to celebrate the win and great Happy Thanksgiving. When the girls finished the night, they walked the city of Nanjing and stopped at a nearby coffee shop. Then later the team headed back to the training center to get ready for a new day and start in Shanghai.